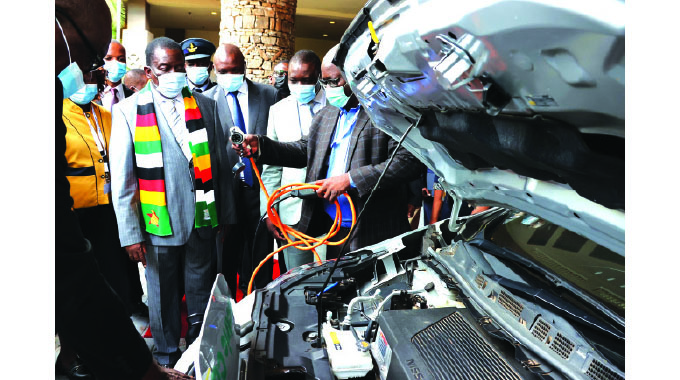 In view of the reality of climate change and the global shift towards renewable energy sources, the President said regional member-states have an obligation to work concertedly towards the realisation of Sustainable Development Goal (SDG) 7 that talks to affordable and clean energy by 2030, through expanding infrastructure and upgrading technology to provide clean and more efficient energy generation.

To address power supply challenges being driven by growing demand in tandem with the economic growth momentum, President Mnangagwa apprised delegates about the ongoing rehabilitation and extension of the lifespan of old plants and building new generation capacity through public and private sector participation.

“The completion of the Hwange 7 and 8 Extension Project is set to bring in an additional 600MW onto the national grid, while renewable energy independent power producers will contribute to the gradual blending of renewable energy into our country’s energy mix,” said President Mnangagwa.

“The regional integration agenda and the associated need to develop shared infrastructure entails that countries in our region must urgently increase the region’s collective energy generation capacity.

“This will not only close the present regional power deficit and the realisation of energy self-sufficiency but also vault our SADC region’s industrialisation, modernisation and over all competitiveness.

“The implementation of cross-border renewable energy infrastructure projects is now more critical and urgent, as we go forward, towards the ‘New Frontier of Net Zero Africa’.”

The high-level conference, which drew distinguished policymakers and expert delegates, comes after the world convened at the United Nations Conference of Parties (COP26) in November last year in Glasgow, Scotland.

COP26 emphasised the growing need to adopt renewable energy as a matter of necessity, given the negative effects of climate change.

As such, President Mnangagwa challenged conference delegates to scale up adaptation and climate change mitigation by crafting concrete recommendations and models on ways to harness the opportunities that exist in the renewable energy sector.

“The adoption of cleaner and renewable energy sources has the potential to advance equality, tackle poverty while strengthening developmental, social and environmental sustainability,” he said.

“My Government has deliberately developed multi-pronged national policies, to mainstream our mitigation and adaptation strategies to climate change, including the renewable energy policy that seek to enhance the use of alternative energies.”

Zimbabwe is fortunate to be endowed with huge and diverse renewable energy potential, which must be tapped to effectively create a sustainable energy portfolio, said President Mnangagwa.

This has hyped the momentum in driving investments in the renewable energy sector from both local and international investors. The new projects, he added, augment power supplies from major power stations, which have tended to be erratic due to challenges induced by the illegal sanctions, antiquated equipment and reduced hydro-power generation in Lake Kariba, due to more frequent droughts, among others factors.

“Ways are, therefore, being explored by the Governments of Zimbabwe and Zambia to develop hydro-power at the Batoka Gorge; Devil’s Gorge and Mupata Gorge. The development of these hydro power plants on the Zambezi gorges have the potential to increase the energy security of the region,” said President Mnangagwa.

“Additionally, a partnership between Zimbabwe and Mozambique on the Mpanda-Nkuwa and other projects in the Zambezi basin are also under consideration. I, therefore, invite investors to come on board and facilitate the development of these yawning bankable investment opportunities.”

Internally, President Mnangagwa said his administration was also undertaking a large scale dam construction programme, which is spread throughout all the provinces of our country, which over and above increasing irrigation capacity and ensuring food security, is set to produce additional hydro- power from these dams.

The President also said more attention must be given to harnessing wind energy as an area that remains untapped in the country.

“Government is also exploring other ways of enhancing energy supply security through demand side management, with prospects for partnerships and investments,” he said.

To ensure universal access to affordable electricity by rural communities, the President said the Rural Electrification Agency was accelerating the electrification programme, which will see increased use of solar mini-grids.

The programme will be complemented by the use of biogas, windmills and other technologies.

Furthermore, Zimbabwe continues to promote the uptake of medium-scale rooftop and ground-based solar systems through net-metering.

As a result of the net-metering regulations were amended to accommodate larger systems of up to 5MW, with corporates now allowed to generate power for own consumption and provide excess capacity to the national power grid.

With regard to liquid fuels, he said the Second Republic has taken a deliberate decision to blend petrol with bio-ethanol from sugarcane and increase production of bio-diesel.

“This has not only reduced our fuel import bill, but has also resulted in reduced greenhouse gas emissions. Furthermore, the programmes have seen the empowerment of communities, especially sugarcane out-growers, through enhanced participation in the mainstream economy,” said President Mnangagwa.

Ahead of elections, Zim authorities intensify onslaught against dissent

NOIC distances itself from ‘bogus employees’