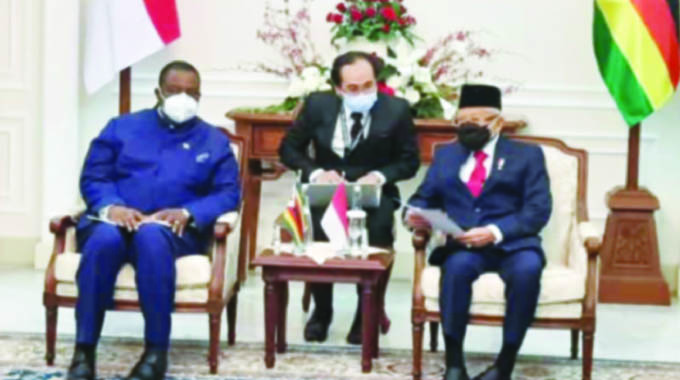 Mukudzei Chingwere in JAKARTA, Indonesia
Indonesia is interested in investing in Zimbabwe and its Government will soon dispatch officials on a feasibility and investment scouting mission following meetings between Vice President Constantino Chiwenga and his Indonesia counterpart Ma’ruf Amin, here yesterday.

Vice President Chiwenga, who is also the Minister of Health and Child Care, is in Indonesia leading a Zimbabwean delegation for this year’s edition of the meeting of sector ministers responisble for Water, Sanitation and Hygiene (Wash).

The Vice President has taken advantage of his visit to further contact and to attract foreign investment as one means of fostering economic development to steer the economy towards an upper middle income economy by 2030.

In an interview after several high level meetings, including one with Vice President Amin, Cde Chiwenga said the Indonesians have shown interest in helping in revamping and modernisation of Zimbabwe’s railway system, manufacturing healthcare consumables and in agriculture, particularly buying cotton and tobacco.

“The first issue which we discussed was the economic cooperation between Zimbabwe and Indonesia on the construction of railway lines,” said Vice President Chiwenga. Zimbabwe not only needs to upgrade existing lines but also lay new lines for new mining and industrial users.

“They said they are interested to be considered among companies that are coming to look and make offers on developing our railway lines.

“We also discussed health issues between our two countries. They have developed a lot in the areas of vaccines and insulins. They are interested that Zimbabwe becomes a hub where we can jointly make those vaccines and insulins and then we become a hub for the sale of those products to the African continent.”

The main problem afflicting the cotton sector was the lack of secured buyers for lint and the market sought by VP Chiwenga is seen as the ideal solution for the revival of the cotton sector. VP Chiwenga also said they discussed possibilities for Zimbabwe to buy palm oil directly from Indonesia rather than third parties. Zimbabwe uses a lot of this oil, a common ingredient in soaps and some other consumer products.

“I have instructed the Ambassador and the Minister of Agriculture to look into the issue of buying palm oil directly from Indonesia rather than buying it through third parties. We use a lot of crude oil but we buy through third parties and we want to see how that will assist reduce prices to our consumers if we buy directly,” said VP Chiwenga.

The Vice President also took time to market destination Zimbabwe inviting his hosts to visit areas such as Victoria Falls among others for tourism.

When he visited the Zimbabwean Embassy here, the Vice President also emphasised the need to pursue economic diplomacy.

Speaking to the media after his meeting with VP Chiwenga, Indonesia’s Health Minister Budi Saikin confirmed that his country was sending a delegation on investment scouting. From his engagements with VP Chiwenga he noted that Zimbabwe’s wish is to build a resilient health system by having the vaccines, all the medical products in the country. “I strongly believe that nations need to be independent in terms of research and development capabilities and also manufacturing capabilities.”

“When pandemics hit us we need to make sure all countries are able to respond. Indonesia has competence in (the manufacture of) vaccines, medicines and has pharmaceutical companies.

“So as a follow-up to the Vice President’s visit, I would like to make sure my team signs a memorandum of understanding with the Ambassador to give this arrangement a formal paper and to send a team.

“So the best way to understand a country is to come and visit. So I would like my team to come to Zimbabwe, and have a sense of what we can do together to develop research and manufacturing capabilities jointly with Zimbabwean companies.”