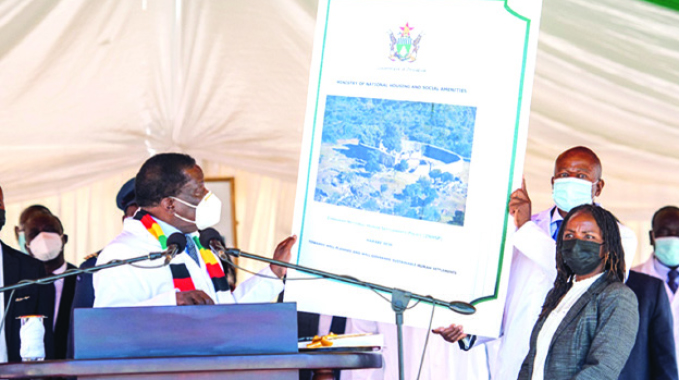 Housing delivery is one of the National Development Strategy 1 (NDS1) pillars. The key drive, therefore, is to address the inadequacies pertaining to infrastructure, and provide citizens with access to affordable and quality settlements.

The trajectory towards the attainment of Vision 2030 revolves around providing human settlements, which meet the aspirations of the Zimbabwean people, while addressing affordability and modernisation aspects.

The housing delivery pillar within the NDS1 is expected to deliver 220 000 housing units by 2025, through collective efforts from stakeholders and all parties involved in human settlements delivery.

This will in turn massively contribute to overall economic growth in line with NDS 1—a five-year economic blueprint that runs from 2021-2025—launched by President Mnangagwa in November 2020.

A successor to the Transitional Stabilisation Programme (TSP), the NDS 1, is key to the achievement of Vision 2030, and seeks to streamline gender, youth, women and other vulnerable groups, hence, creating equal opportunities for all citizens in an economically stable environment. President Mnangagwa officially hands over keys to Mrs Mbedzi, a teacher at Dulibadzimu Primary School at the commissioning of the Beitbridge Redevelopment Housing Project

The Ministry of National Housing and Social Amenities is working tirelessly towards reducing numbers on housing waiting lists and improving services in settlements.

Established in 2019, the Ministry’s mandate is to provide modern and affordable human settlements for Zimbabweans. The fulfilment of this mandate is premised on an inclusive approach in which no one will be left behind in the nation’s drive towards a prosperous and empowered upper middle-income society by 2030.

Since its inception, the Ministry has scored a number of successes spurred on by the economic blueprint, NDS 1. It has embarked on an accelerated housing delivery programme, which is aimed at ensuring access to housing by the greater part of the population.

The Zimbabwe National Human Settlements Policy, officially launched by the President on September 2, 2021 replaces the National Housing Policy of 2012, and addresses several shortcomings inherent in the preceding policy outline.

The human settlements policy is aimed at informing the implementation of relevant facets of Agenda 2030’s Sustainable Development Goals, the African

Union Agenda 2063, Vision 2030 and national and international resilience frameworks. It guides all human settlement developments in the country as enshrined in the national Constitution (Amendment No. 20 of 2013). Densification of settlements, spatial planning requirements and the development of off-site and on-site infrastructure before occupation of land, are among other essentials in the policy. And, these crucial elements ought to be upheld in housing development projects, since they are the cornerstones of the housing delivery sector.

The policy will help create a beneficial environment that will foster a greater leverage for the Ministry and other stakeholders to interact with regional and international bodies eager to invest in human settlements in the country.

The demand for housing has, indeed, risen to alarming rates, and is currently estimated at 1,5 million housing units. It is, therefore, the Ministry’s clarion call to all players in the human settlements sector to put heads together in finding solutions that address the housing challenge, as well as the attendant social amenities. Efforts to address the housing challenge

In efforts to address the housing challenge, the Ministry is spearheading implementation of the National Housing Delivery Programme (NHDP), a massive plan aimed at delivering 220 000 housing units by 2025, and over 470 000 in the long term.

The project aims at creating inclusive settlements that meet the needs and aspirations of Zimbabweans, while utilising local available resources. The development agenda is leaving no one behind, given that the Ministry is championing housing programmes for the entire citizenry of Zimbabwe. In a bid to accelerate the provision of housing, the Government has adopted several strategies to ensure access to housing by the majority of citizens.

Regularisation/sanitisation of informal and dysfunctional settlements

As part of mechanisms to address the housing backlog and enhance human settlements delivery, the regularisation/sanitisation of informal and dysfunctional settlements is now gathering momentum across the breadth and length of the country.

Efforts meant to bring sanity in the said settlements are underway targeting the following: Caledonia in Goromonzi, Harare South, Hatcliffe North, Gimboki South in Mutare and Cowdray Park in Bulawayo.

Other areas requiring such initiative will be considered as the programme gathers traction. The Ministry is actively engaging the private sector and banks, through tendering, for feasibility studies, design, funding and construction of infrastructure in the informal settlements. The process is now at an advanced stage.

Revitalisation of the derelict structures is aimed at making the dwellings more habitable, attractive and modern. In instances where the structures are no longer sound, construction of new apartments shall be done.

Urban regeneration is targeting Mbare residential suburb in Harare, Sakubva in Mutare and Makokoba in Bulawayo. In terms of implementation, Sakubva Urban Regeneration is most advanced, and has since been accorded National Project Status, entailing duty free importation of capital equipment, materials and/or goods, among other attendant concessions. In these areas, construction of social amenities infrastructure, such as recreational facilities, clinics, among others shall also be prioritised.

The Government has initiated Revitalisation Programmes for Rural Settlements, which are intended to bridge the gap between the rural and urban areas. The Ministry is currently developing proto-type housing designs for use in rural areas, and more designs are being developed to widen selection.

In the quest to foster proper waste management in Zimbabwe’s rural and peri- urban settlements, the Rural Waste Management Programme is being championed, targeting identified schools, clinics and chiefs’ homesteads.