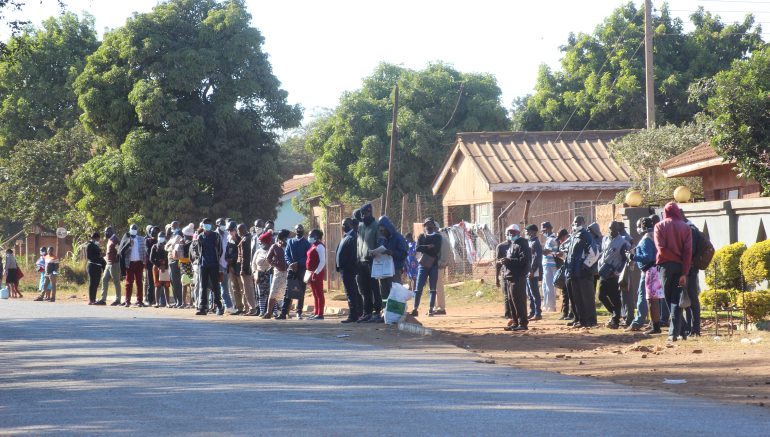 Harare, Zimbabwe – Masimba Gwazho waits in line at a bus terminal in the central business district of Zimbabwe’s capital, Harare.

“I have been in this queue for close to an hour,” the 39-year-old bricklayer told Al Jazeera.

More than 100 people have formed a meandering line behind him – all of them trying to reach Chitungwiza, a satellite town 25km south of Harare.

They are not the only frustrated commuters. Line after line of them, all trying to reach nearby towns, fill the bus terminal – one of the busiest pick-up and drop-off points in the capital.

Gwazho said before the coronavirus pandemic, he only had to wait five minutes to catch a bus. But now: “You can wait for an hour or more here before you catch a bus ride home,” he said.

“Every day, this is our life.”

Commuter omnibuses are small vans retrofitted with seats to carry 18 passengers. For more than two decades, they’ve been the preferred intercity mode of transport in the country, lauded for their efficiency and speed.

But when the pandemic hit Zimbabwe last year, authorities barred commuter omnibus operators from plying their routes, as part of a suite of measures designed to stem the spread of the virus.

Three lockdowns and more than a year later, buses have the green light to operate again. But the share of them returning to service is minuscule.

Prior to the pandemic, there were 50,000 commuter omnibuses operating in the country, Greater Harare Association of Commuter Omnibus Operators representative Ngoni Katsvairo told Al Jazeera.

One factor holding back the return of more omnibuses is that only those contracted by Zimbabwe’s struggling transport utility – the Zimbabwe United Passenger Company (ZUPCO) – are allowed to pass easily through roadblocks set up during the pandemic to make sure virus containment measures are being observed.

Katsvairo reckons that of the 900 commuter buses operating in Harare, less than 100 have partnered with ZUPCO. Operators can simply make more money working independently as roadblocks come down with the easing of COVID-19 restrictions, he said.

That is little solace for frustrated commuters, especially those who need to travel to the capital.

Simbarashe Gwasera is a resident of Kuwadzana, a densely packed suburb west of Harare. When Al Jazeera caught up with him, he said he’d been waiting at his local bus stop for over an hour.

“At least four buses have passed through and they were full,” he said.

Gwasera said he can’t afford to hitch a ride.

“I only have 30 [Zimbabwean] dollars on me so I have no choice but to wait for the buses,” he said.

“I don’t even bother to go to the bus terminus in town after work,” he said. “You can leave town around 7pm or even 8pm if you use the buses.”

Some passengers also grumble that some ZUPCO bus drivers refuse to accept cash, insisting instead that customers pay instead with tap cards – electronic debit cards that can be loaded with prepaid bus fare credits.

William Basopo found himself out of luck on a recent Tuesday. His tap card was tapped out, and several buses that did arrive at the stop in Kuwadzana where he was waiting wouldn’t accept cash.

“The buses that came wanted only tap cards,” the 52-year-old told Al Jazeera.

Those who do have credit on their tap cards are known to exploit the situation, charging passengers who don’t have a tap card or whose cards are empty a premium of 50 Zimbabwean dollars ($0.35) for a debit.

Zimbabwe’s cabinet said in May that it would support the “urgent procurement” of 667 additional buses nationwide to improve ZUPCO’s efficiency and bring some relief to commuters.

For commuters languishing in long queues or caught out with empty tap cards, those improvements can’t come soon enough.

“Last week, I couldn’t get transport back home because I had cash,” said Basopo. “I bought half loaf of bread and went back to work.”

If Rhodesia developed due to exploitation, why isn’t Zimbabwe more developed as it’s even more exploitative?