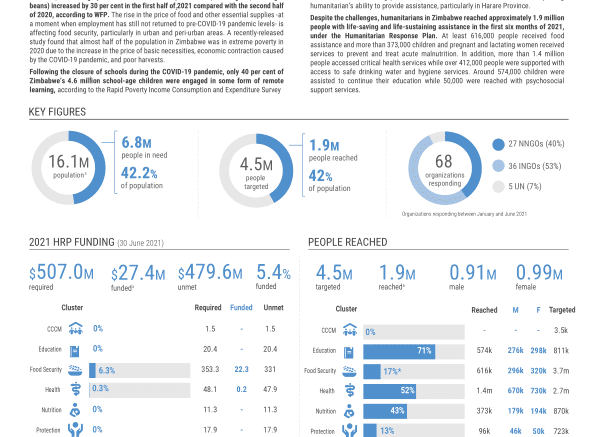 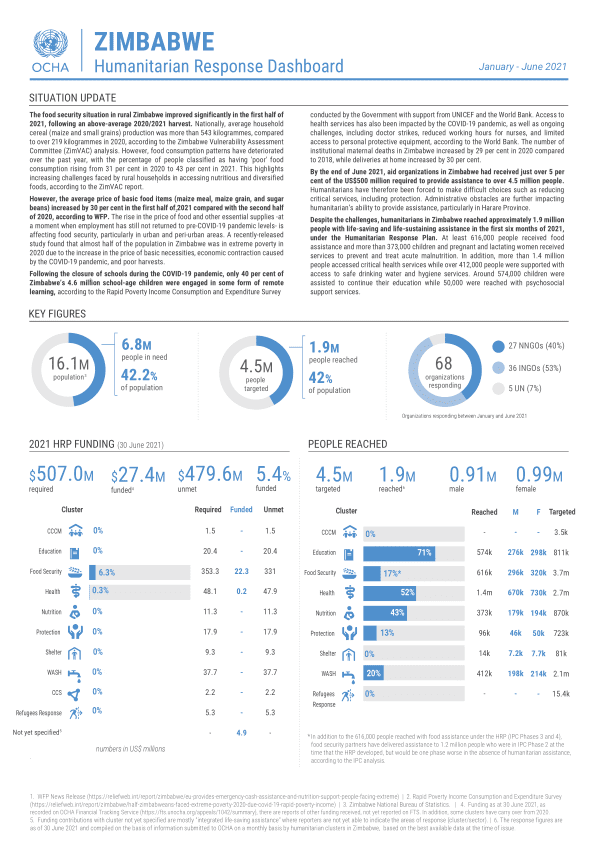 The food security situation in rural Zimbabwe improved significantly in the first half of 2021, following an above-average 2020/2021 harvest. Nationally, average household cereal (maize and small grains) production was more than 543 kilogrammes, compared to over 219 kilogrammes in 2020, according to the Zimbabwe Vulnerability Assessment Committee (ZimVAC) analysis. However, food consumption patterns have deteriorated over the past year, with the percentage of people classified as having ‘poor’ food consumption rising from 31 per cent in 2020 to 43 per cent in 2021. This highlights increasing challenges faced by rural households in accessing nutritious and diversified foods, according to the ZimVAC report.

However, the average price of basic food items (maize meal, maize grain, and sugar beans) increased by 30 per cent in the first half of 2021 compared with the second half of 2020, according to WFP. The rise in the price of food and other essential supplies -at a moment when employment has still not returned to pre-COVID-19 pandemic levels- is affecting food security, particularly in urban and peri-urban areas. A recently-released study found that almost half of the population in Zimbabwe was in extreme poverty in 2020 due to the increase in the price of basic necessities, economic contraction caused by the COVID-19 pandemic, and poor harvests.

Following the closure of schools during the COVID-19 pandemic, only 40 per cent of Zimbabwe’s 4.6 million school-age children were engaged in some form of remote learning, according to the Rapid Poverty Income Consumption and Expenditure Survey conducted by the Government with support from UNICEF and the World Bank. Access to health services has also been impacted by the COVID-19 pandemic, as well as ongoing challenges, including doctor strikes, reduced working hours for nurses, and limited access to personal protective equipment, according to the World Bank. The number of institutional maternal deaths in Zimbabwe increased by 29 per cent in 2020 compared to 2018, while deliveries at home increased by 30 per cent.

By the end of June 2021, aid organizations in Zimbabwe had received just over 5 per cent of the US$500 million required to provide assistance to over 4.5 million people.

Humanitarians have therefore been forced to make difficult choices such as reducing critical services, including protection. Administrative obstacles are further impacting humanitarian’s ability to provide assistance, particularly in Harare Province.
Despite the challenges, humanitarians in Zimbabwe reached approximately 1.9 million people with life-saving and life-sustaining assistance in the first six months of 2021, under the Humanitarian Response Plan. At least 616,000 people received food assistance and more than 373,000 children and pregnant and lactating women received services to prevent and treat acute malnutrition. In addition, more than 1.4 million people accessed critical health services while over 412,000 people were supported with access to safe drinking water and hygiene services. Around 574,000 children were assisted to continue their education while 50,000 were reached with psychosocial support services.