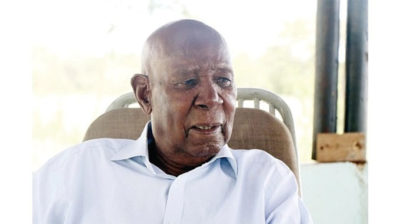 OPPOSITION Zapu yesterday described the death of former Zimbabwe People’s Revolutionary Army (Zpra) commander, Abraham Dumezweni Nkiwane (93), as a loss to the nation as he was instrumental in the liberation of the country.

Nkiwane died on Tuesday at the United Bulawayo Hospitals after battling with prostate cancer.

“His interest in Zapu and the politics of then Southern Rhodesia was engendered through stalwarts such as the recently deceased icon, Kenneth Kaunda, who handed him over to the late Vice-President Joshua Nkomo as he was at that time a United National Independence Party member,” Maphosa said.

Maphosa said Nkiwane also worked with the African National Congress’ uMkhonto weSizwe and operated with comrades like Joe Modise both in Rhodesia and apartheid South Africa.

He said Nkiwane worked and operated with Swapo of Namibia as an international liberator for southern Africa.

Maphosa said when he joined Zapu, Nkiwane was one of the officials that were persecuted by the Zanu PF government for standing up against its disastrous policies.

“A principled man to the core, Bro Nkie never wavered in his support for Zapu.  He remained a dedicated member right up to his death. He was not one to give up the vision of empowerment for all in exchange for the ‘get rich quickly’ corruption that many fell for,” he said.

“At one stage, Bro Nkie, was once employed in the education sector, but was fired from his job for what the reactionaries termed, ‘involvement in politics’ a euphemism for anyone opposed to the disastrous course the ruling party was pursuing.”

Maphosa said Nkiwane was also the most affected by Gukurahundi, which claimed over 20 000 lives in Matabeleland and Midlands provinces in the 1980s.

He is survived by wife Ntombizodwa and three children.

Mourners are gathered at Joyful Farm in Umguza, Matabeleland North province, while burial arrangements are yet to be announced.