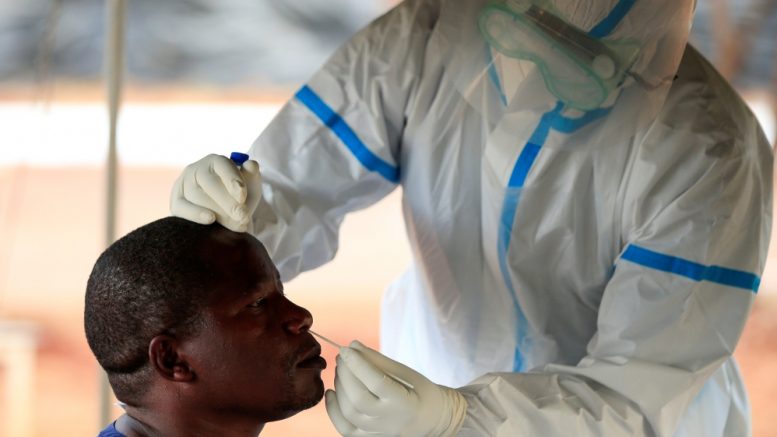 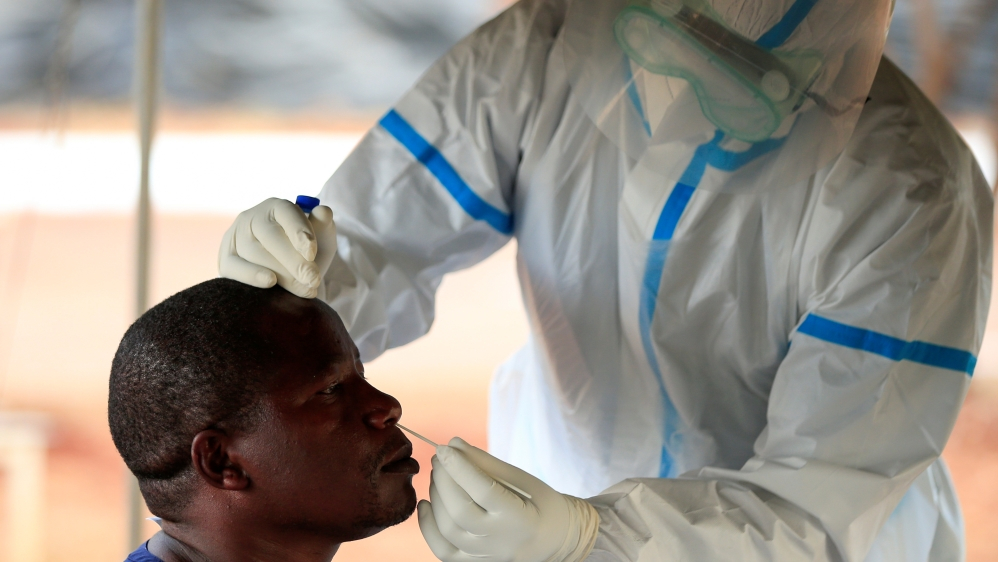 Harare, Zimbabwe – Exhibiting symptoms synonymous with COVID-19, Kuda Musasiwa, a 43-year-old father of four, immediately got tested for the infectious disease. When the results of the laboratory swab test came, they showed he was free of the deadly respiratory virus that has killed close to two million people globally.

Overjoyed, Musasiwa, an entrepreneur, shared the good news with his friends on Facebook.

“Negative. Thank you God,” he wrote.

But his joyous triumph would be short-lived as his condition began to worsen.

“The result of that test was a false negative,” Roy Musasiwa, Kuda’s father, told Al Jazeera in a telephone interview. With each passing day, Musasiwa saw his son’s medical condition deteriorate.

“His vitals kept going down. He had an oxygen saturator but his condition was becoming worse. On Saturday, the doctors said his condition had worsened and needed hospital admission,” Musasiwa said.

By then the doctors ascertained it was indeed a COVID-19 case and recommended a ventilator.

But that was just the beginning of the family’s arduous journey towards getting healthcare for their son in the troubled Southern African nation.

Zimbabwe is in the throes of a deepening economic crisis characterised by hyperinflation that has pushed food prices beyond the reach of many, in addition to stagnant salaries, foreign currency shortages, a rapidly weakening currency, low production, water shortages, power blackouts and rising poverty.

The country’s healthcare sector has not been spared from the vagaries of the economic crisis and is in shambles. With cases rising, the sector is struggling to cope.

“Looking for a hospital bed was possibly our worst nightmare,” Musasiwa said. “We were told hospitals were overwhelmed by COVID-19.”

All COVID-19 public facilities could not take his son because they were full, he added.

Parirenyatwa, one of the designated COVID-19 hospitals had only two intensive care unit (ICU) beds for COVID-19 patients and they were full, Musasiwa was told.

Private hospitals were chock-full as well.

With his son’s condition now precarious, he was stuck. “It was a harrowing experience.”

On Saturday, government spokesman Nick Mangwana wrote on Twitter, “We are being overwhelmed and overrun by this virus.”

Despite the hurdles in securing a hospital bed, Musasiwa kept phoning around all day trying to get his son admitted to a hospital.

His fortune took a turn for the better when Acie Lumumba, a social media influencer and friend of the ailing Musasiwa, tweeted he needed a bed for a COVID-19 patient – one with a ventilator – and was willing to pay any price.

Such was the level of desperation for the family and friends. A well-wisher donated a ventilator after the plea for help and St Anne’s Hospital in Harare offered a bed.

“It was only by a stroke of good circumstances,” Musasiwa said.

He counts himself among the lucky ones after finally getting his son admitted to St Anne’s Hospital.

“It took a whole day of phoning around and searching and visiting various hospitals. We were the lucky ones,” Musasiwa said.

Others have not been as fortunate as the Musasiwas with some dying without admission to a COVID-19 hospital.

Human rights activist Sithabile Dewah’s family was not as lucky.

When her brother-in-law got sick on December 29, he was admitted in the ICU of the Avenues Clinic, a private hospital in the capital, and tested positive for COVID-19.

“They then said he needed a ventilator and they didn’t have one. We started looking for a hospital with a ventilator,” she told Al Jazeera.

“I went to St Anne’s Hospital and they said they had beds and ventilators but had no nurses. So I tried the doctors’ numbers that I was given but I didn’t manage to go through the whole night.”

In the morning, she went to Arundel Hospital, a private facility treating COVID-19 patients in Harare.

“Although they were taking patients in at the new wing at the hospital, I was told I needed a referral from government officials to have him admitted. I found that weird.  Even if you had the money, they were not taking in walk-in patients,” she said.

Frustrated, she left Arundel and headed to Parirenyatwa but the facility had no nurses as well and had only one ventilator.

Desperate, she went back to St Anne’s again.

Although the hospital had free beds and a ventilator, the hospital officials said the facility did not have nurses and urged her to source one, an arrangement she agreed to.

“But there was no urgency on their part,” Dewah said. “I think they have just seen too much death to care.”

She then posted her request for a bed and a ventilator on Twitter.

Her brother-in-law succumbed to COVID-19 the same morning without getting admitted.

She said the COVID-19 statistics were not accurate and urged the government to do mass testing, tracing and treatment.

“Government is not being honest and transparent in terms of its plans and response to the pandemic. Many people are dying at home. Many are just taking home remedies,” Dewah said.

On Saturday, Zimbabwe imposed a nationwide curfew, banned gatherings, and ordered non-essential businesses closed for a month in an effort to curb a surge in coronavirus infections.

Dewah said Zimbabweans were on their own because government officials have their own hospitals.

Norman Matara, secretary of the Zimbabwe Association of Doctors for Human Rights, told Al Jazeera that Harare’s public hospitals had only 30 ICU beds.

“The problem is very few institutions are admitting COVID-19 patients because bed capacity is very low in public hospitals. This means that patients requiring these services will die at home. The few private facilities admitting patients are charging an arm and a leg,” Matara said.

One hospital is said to be charging $2,500 to admit patients in Harare. To put things into perspective, teachers in Zimbabwe earn an equivalent of $50 monthly.

Matara said there was a need to expand the bed capacity of public hospitals to cope with rising cases.

“When the health minister, Constantine Chiwenga, made his announcement, I think he dwelled too much on the preventive side of things and did not focus on the curative side, the vaccine logistics, how they are going to provide PPE for front-line workers. A lockdown will slow down the infections after 30 days, but that is not the solution,” said Matara

A front-line doctor at Parirenyatwa who spoke to Al Jazeera on condition of anonymity painted a grim picture of the COVID-19 situation.

“That is what we are currently making use of,” the doctor said.

The COVID-19 unit currently has about 60 patients. He said a shortage of key staff such as nurses at the hospital was hampering the fight against the disease.

“Working in the COVID-19 unit is voluntary but no one is volunteering – especially ICU nurses and intensivists [anaesthetists],” he told Al Jazeera.

“Six patients died in the ward the other night and then four but its mostly because there is no medication and equipment.”

Kuda Musasiwa’s father said he is praying for a miracle for his son.

“Our son’s situation needs a miracle. It cannot be handled without miracle,” Musasiwa said.

Musasiwa reckons the COVID-19 situation in the country is far worse than authorities care to admit.

Nick Mangwana, the government spokesperson, said Zimbabwe does not have a shortage of beds for COVID-19.

“We have a lot of beds available. Our current occupancy is around 18 percent only. What happens is that if some of our COVID-19 special nurses test positive, it either affects a big number of them or some have to be isolated until tested and the results come out. That turns to paralyse that ward and almost puts it out of commission until it has been disinfected and another set of staff takes over. That’s what overwhelms us. Not the bed space,” he told Al Jazeera.

He said the government was working on incentive packages to attract key staff in COVID hospitals.

Harare Metropolitan Minister Oliver Chidau said the government needs to enforce its lockdown to contain the spread of the disease in the capital.

Currently, Harare has the highest number of COVID-19 cases.

“As government, we have a lot of hospitals that have been refurbished … We all thought COVID-19 had receded. We didn’t anticipate this sudden spike in infections. With the lockdown, we should be able to cope,” Chidau told Al Jazeera.

“The new wave caught us unawares. We are doing our best to be on top of the pandemic. Even developed countries are struggling with this pandemic.”

An analysis of official COVID-19 data shows new cases have been rising since November and averaged 100 cases daily last month, compared with the previous two months when infections stood at about 25 a day.

The numbers have been rising exponentially since last week.

On Tuesday, 534 cases were recorded, bringing the national total to 15,829 confirmed cases, a figure more than 50 percent higher from a month ago.

“As a Zimbabwean, I feel sad for my country that COVID-19 has come to an ill-prepared country,” Musasiwa said. “As a Christian, the situation in God’s hands.”