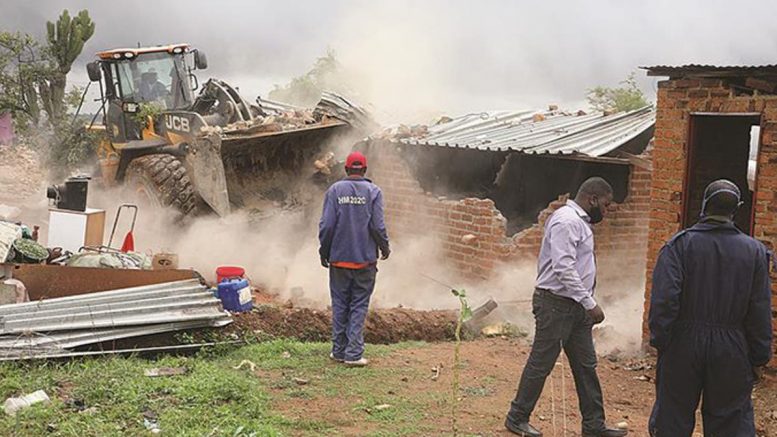 Source: We are not at war: Malunga | Newsday (News)

VETERAN musician and promoter Clive Malunga yesterday challenged the government to run institutions based on non-partisanship after his Jenaguru Arts Centre built 25 years ago in the capital was on Thursday demolished by Harare City Council.

In an interview, Malunga said the government has to put mechanisms that protect the arts industry.

“We are not in Gaza or Palestine where Israelites destroy people’s things and we are not at war with each other. So, the government should make sure these institutions are not run based on partisanship where people look at where you come from or who you support. There is unfairness in all this,” he said.

“Zimbabwe unlike other countries has vast land and if they wanted to give someone that land they should have just given them another piece rather than destroying our centre. The government should put in place mechanisms that protect the arts industry and if we had that in place we would not have these mishaps.”

“The only issue here is that he (Malunga) encroached on land which is meant for other things that is why the buildings were demolished. It doesn’t matter if he has letters, but if he doesn’t have the offer letter it means the land is not his,” he said.

Malunga, however, vowed to stay put at the centre, although it will no longer accommodate students. “We still have the arts centre, but it is now small to cater for all the students, like we have traditional dance groups that we have been teaching from various parts of the country and now we are unable to help them achieve their goals because we now have a small place,” he said.

“People in power should make sure institutions are fair because the blame will always go to the ruling party Zanu PF and MDC (but) the forums should not be used at national entities. Anyone who wants to do this should go and do it at their parties. People should not label others or me as a sell-out because I am not a sell-out.”

Malunga said the centre was demolished without giving him an opportunity for negotiations.

“I have a letter which I wrote to the city council pleading with them to develop it so that I start my Jenaguru project. It’s now 25 years since its inception in 1995,” he said.

“I have written them letters and applied to buy the land, but they just placed me on a waiting list, in which I was ready to follow all normal procedures to acquire the place, but they told me at first that the place was meant for a technical college and to my surprise they are saying someone has bought it.”

Malunga said he had explored several avenues that include travelling abroad to source funds in order to develop the centre, adding that he had high hopes that the place will go a long way in uplifting untapped talent.

“The place has been playing a crucial role in ensuring that people realise their talents, while at the same time we were sending people to other countries to pursue their dreams,” he said.

“Notwithstanding all that they just sent me three letters demanding that I vacate that place and it means all dreams have been shuttered.”

In a letter in our possession dated January 10, 1997, Malunga applied to the council’s Valuation and Estates Division for additional land to build an open air theatre citing that their 1 800 square meters was not able to accommodate the arts centre structure and an open air theatre.

“We are applying for an additional land of about 2000 square meters to build an Open Air Theatre adjacent to the arts centre structure. This idea has been brought about by a donor who has pledged $200 000 for the construction of the Theatre, where performances will start before completion of the arts centre’s auditorium,” read part of the letter.

The Sport, Recreation and Culture ministry on January 14 1997 wrote to the Harare City Council, supporting the Jenaguru’s application for land.

“In response to your memo, the ministry to indicate their support for a larger portion of land in light of the magnitude of the Jenaguru project and the finance anticipated, I write to endorse the enlargement of land as by the leaders. It is true an open air theatre will further enhance the cultural activities of the centre and by so doing it will widen the participation of many more artistes and audiences. We, therefore, recommend that the Harare City Council considers this application for additional land more favourably,” a letter signed by ministry deputy secretary for culture one MD Nkiwane read.