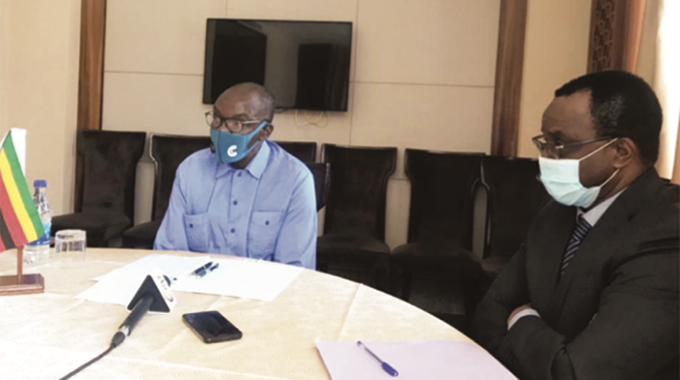 VICE President Kembo Mohadi returned home yesterday from Guinea, where he had joined many African Heads of State and Government at the inauguration of Guinea President, Professor Alpha Conde.

He touched down at the Robert Gabriel Mugabe International Airport just after 6.30pm yesterday.

VP Mohadi, who had a two-hour meeting over dinner with President Conde after the inauguration on Tuesday, described the visit to Guinea as “an eye-opener”.

In an interview at the RGM International Airport, VP Mohadi said: “What I experienced is not what I expected. I had dinner for two hours with President Conde and we discussed a number of areas of cooperation so that maybe, we can have a Joint Permanent Commission so that we have delegations from either side appreciating what we have here in Zimbabwe and in Guinea.

“It was a good trip and an eye-opener. We managed to meet a number of Heads of State and Government and discussed a number of issues. I am very happy with the re-engagement efforts. It is always good to engage and re-engage, especially within Africa. It’s very important. VP Mohadi also had meeting a number  of leaders including Angola Vice President Bornito de Sousa Baltazar Diogo and Gabon Prime Minister Rose Christiane Raponda and discussed areas for possible cooperation, especially on the economic front.

“That is what the President (Conde) said, that he wants to see a more united Africa than what is obtaining.”

The two spoke of the need to enhance cooperation and activating the existing agreements signed in the past.

The squad against Zimbabwe will be announced on October 19