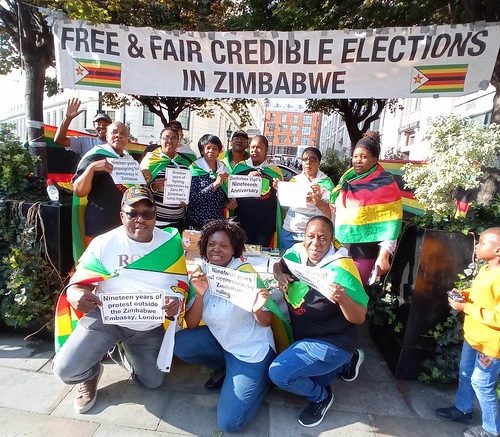 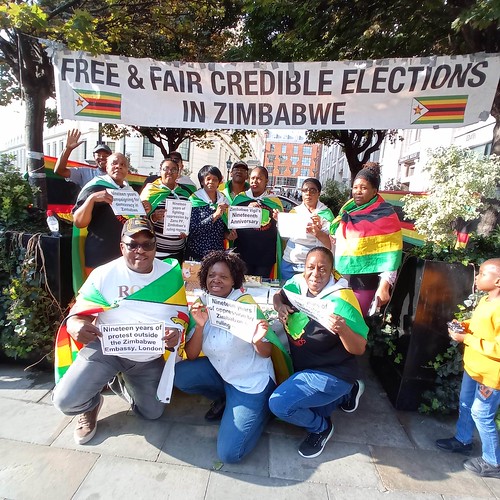 President Mnangagwa’s State of the Nation Address was delivered virtually from the comfort of State House. Everything is going well, he said, the economy is flying. (As to where it’s flying, read on.)

Zimbabwean exiles, gathered outside the Zimbabwe Embassy in London to mark the nineteenth anniversary of the Vigil, were glad to be there in person today. We were not convinced by Mnangagwa’s virtual speech and were pleased to hear that the MDC T leader Douglas Mwonzora was critical, saying that Mnangagwa’s government had failed to address issues affecting the people.

Mwonzora complained that Mnangagwa had not talked about electoral reforms: ‘He did not speak on issues of corruption.  Zimbabwe is losing about US$3 billion per year because of illicit financial flows’, he added.

In this virtual parliamentary fiasco, where the MDC of Nelson Chamisa has been virtually excluded, it was encouraging to hear someone raising the key questions of corruption and electoral reform (see: https://www.newsday.co.zw/2021/10/mnangagwa-speech-hot-air/).

The massive leak of financial documents known as the Pandora Papers has exposed dodgy offshore transactions by powerful people all over the world. Among them of course are Zimbabweans.

They include what NewZimbabwe describes as ‘massive diamond plunder’ by Mnangagwa’s relative Martin Rushwayo, deputy chief secretary to the president and cabinet. Apparently he set up an offshore shell company in the Seychelles to trade in diamonds while serving as defence secretary (see: https://www.newzimbabwe.com/massive-diamond-plunder-exposed-in-leak/).

Mnangawa’s attempts to persuade the world that he is not just another tinpot dictator and Chinese lackey have failed, judging by the brush-off Foreign Affairs Minister Frederick Shava received from the European Union’s Commissioner for International Partnerships, Jutta Urpilainen.

The Commissioner insisted that Zimbabwe should fully implement political and economic reforms, including the recommendations made by the EU’s 2018 Observer Mission, before the next elections in 2023 (see: https://www.newsday.co.zw/2021/10/eu-demands-zim-reforms/).