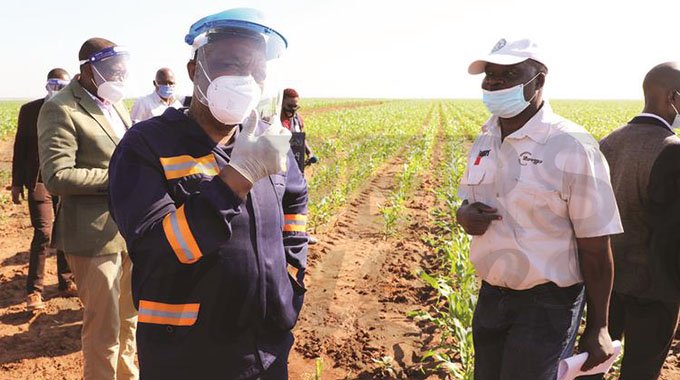 Source: Utilise land or lose it — VP Chiwenga | The Herald

Rumbidzayi Zinyuke Manicaland Bureau
FARMERS not using their farms fully risk having them repossessed or reduced to sizes they can use productively, so agricultural production can rise and play a pivotal role in the attainment of an upper middle income economy by 2030.

Vice President Constantino Chiwenga, during a tour of a winter maize crop at Farm 40 in Middle Sabi, yesterday said all farm land must be used fully or reassigned.

He commended farmers who had come on board to increase productivity, which he said was the key to economic development.

“Government will not go back on the initiative to downsize unproductive farms as this will promote production,” he said.

Recently, President Mnangagwa said the “use-it-or-lose-it” principle initially announced for the mining sector would also be applied in the agriculture sector where vast tracts of land were idle.

He was addressing a meeting of provincial ministers when he stressed the need for land to be used for maximum productivity to boost food security and production of raw materials and so revitalise the economy.

VP Chiwenga urged all farmers to play a part in the development of the country’s agriculture sector where a lot of land was still being underused.

Targets for the winter maize programme have been revised to 8 000 hectares following overwhelming interest shown by farmers, VP Chiwenga said. This is despite many challenges related to capacity use and the need for upgrading technical skills.

Government had initially set a target of 4 000ha for winter maize, which was then revised to 5 500ha following high interest by farmers and corporates. An additional 2 500ha were committed by farmers in Middle Sabi yesterday to shore up the area expected to be under maize.

“The reason why we embarked on winter maize is to augment the summer crop to boost grain reserves and meet our national requirements. Most of our GMB depots are currently under stocked, because crop production was very low in the past season, due to drought.

“We therefore need to supplement production of the grain to reduce importation. The winter maize programme is taking advantage of our climate especially that experienced in the Lowveld” he said.

He said other farmers had not managed to join the programme because their land was still committed to cotton, wheat and sugar beans.

About 280ha have been put under winter maize in Middle Sabi alone, with 126ha being produced in partnership with an investor, Makata Bananas at Farm 40.

Middle Sabi farmers’ chairperson Mr Skhumbuzo Tondhlana said farmers were raring to go and would kick-start planting of the additional 2500ha once inputs are availed.

“We are hopeful that in the next few days we will receive fuel to make sure that we plant on time. We have not started registering for the summer crop but we will be mobilising our farmers soon for that,” he said.

Minister of State for Manicaland Dr Ellen Gwaradzimba said the province was prepared to make a meaningful contribution to the production of cereals in the country.

She said the province was targeting 20 000ha for the command maize programme and 200 000 ha for other programmes like the Presidential Input Scheme and Pfumvudza in the summer season. About 103 000 farmers have so far been trained and registered under the Pfumvudza concept.

Dr Gwaradzimba commended partnerships being formed between farmers and investors which she said would increase production.

“People were given land, but some have not been using it. We need to educate our people so that they know that it is important to use all available land to increase food security,” she said.

She highlighted the need to refurbish irrigation equipment, which is important to improve production.

Farmers in Middle Sabi have been facing challenges in accessing fuel, which is affecting the winter maize programme.

Minister of Energy and Power Development Fortune Chasi said fuel would be delivered to farmers as soon as possible to ensure they were not disturbed.

Finance and Economic Development Minister Prof Mthuli Ncube said the attainment of Vision 2030 could only be achieved if the country was food secure. He said Treasury would ensure that funds were available on time for inputs to get to the farmers early.