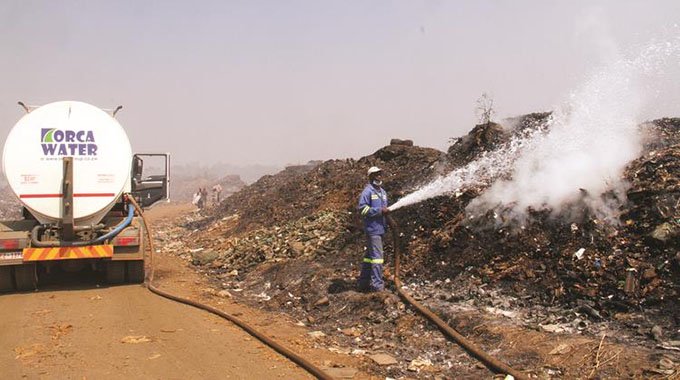 Source: Support pours in to douse blaze | The Herald

SEVERAL organisations and individuals have chipped in with resources and equipment to assist the Harare City Council extinguish the blaze that has been raging at Pomona dumpsite since last Friday.

Recently, the Air Force of Zimbabwe provided a fire tender to boost the fire fighting teams’ effectiveness at the site while a group of residents are also actively sourcing equipment, fuel and water to help the fire-fighting teams.

Some of the companies that were at the scene include Horbax Trading (Pvt) Ltd and Orca Water that have provided water bowsers while others also provided front end loaders and tippers. Mashwede Holdings mobilised a tipper truck and 100 litres of diesel and another fuel company, Trek donated 400 litres of diesel.

In an interview, a Mt Pleasant resident, Ms Helen Davidson, who was also at the scene and speaking for a group of residents organising practical assistance applauded the companies and individuals that have assisted the local authority.

“We have had amazing support from various companies and organisations. So far a total of 1 200 litres of diesel have been paid for while $27 000 cash donations have been handed over,” she said.

EMA Harare provincial environmental education and publicity officer Ms Batsirai Sibanda said council was reluctant to deal with the issue of the landfill.

“What we are seeing has been going on for between three and four days due to poor management of waste. 70 of the 100 hectares was burnt, the fire could have been managed easily if there were proper internal fire guards.”

Harare spokesperson Mr Michael Chideme said they were pushing for regional landfills in consultation with Ministry of Lands and Ministry of Local Government.