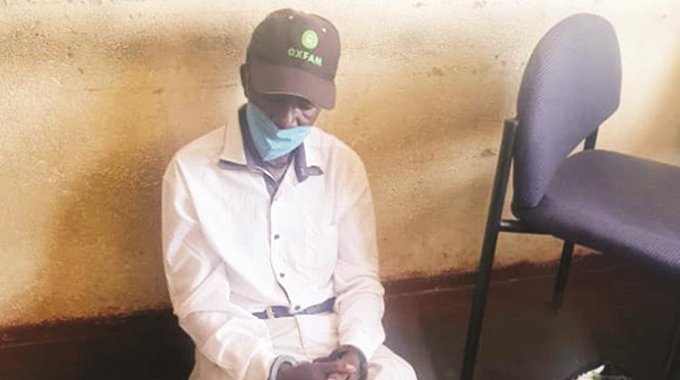 Tapiwa Makore (Senior) (57), accused of murdering his brother’s seven-year-old child with the help of his herdsman, Tafadzwa Shamba, has been remanded in custody.

Makore is an elder brother to the victim’s father.

He appeared before Murehwa magistrate Ms Chiedza Gatsi facing charges of murder and was remanded in custody to October 13.

Prosecuting, Ms Paidamoyo Gutu told the court that on September 17 at around midday, Shamba reportedly proceeded to a garden which Tapiwa (junior) was watching over.

It is alleged that the accused person had earlier given Shamba the keys to his house.

Shamba reportedly lured the now deceased from the garden to Makore’s homestead where he detained him in the living room after giving him sadza.

Makore was alerted that the boy was missing and reportedly joined other villagers in searching for him till midnight to remove suspicion.

He later went home and found the boy asleep, under the guard of Shamba. At 1am, the pair reportedly carried the boy to a secluded area in the company of Makore where they killed him.

Makore allegedly pinned the boy to the ground while Shamba used a knife to cut off the head, arms and limbs.

The remains were packed into two different bags with limbs and arms in one pack.

Makore carried the pack which had limbs and arms, while Shamba carried a pack containing the abdomen and head.

The abdomen was dumped near Mr Summer Murwira’s homestead, but Shamba took the other parts to Makore’s homestead.

On the same day, Mr Murwira discovered the abdomen which was being eaten by his dogs.

It is also alleged that on the same day, Shamba removed his blood-stained pair of trousers and placed them in Makore’s kitchen hut.

On September 20, detectives recovered the pair of trousers belonging to the deceased after searching Makore’s house.

On September 23, Shamba was arrested and a search was conducted in his bedroom, leading to the recovery of a white blood-stained vest.

He confessed to committing the murder with Makore.