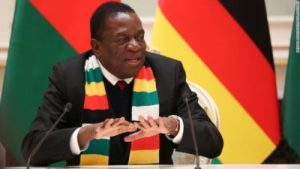 In November 2017, Mnangagwa stormed to power through a military coup that toppled long-time leader Robert Mugabe, hogging international goodwill and overwhelming support at home, after decades of misrule by his predecessor.

Riding on the mantra “Zimbabwe is Open for Business” and pledges to ring in sweeping political and economic reforms, Mnangagwa started his tenure with relative endorsement from the international community, which had faith that he would end the country’s near three-decade isolation.

However, there was also a lot of scepticism from critics who pointed out that Mnangagwa, a long time protégé of Mugabe would merely perpetuate (even with renewed vigour), the system of patronage and corruption that his predecessor had established, rather than uproot it.

On August 1, 2018, Mnangagwa heralded his calamitous start at the helm after state security agents shot down six civilians in the aftermath of a disputed poll that he won by a wafer thin margin of 50,6%.

Emerging triumphant from the disputed poll, Mnangagwa’s legitimacy and political will to shepherd Zimbabwe into the new age of democracy, constitutionalism and prosperity hung in the balance, attracting fierce condemnation at home and abroad.

At the time, state security agents killed six civilians and the EU led the chorus of condemnation, highlighting that bringing to justice the perpetrators of human rights abuse and implementing recommendations of the Kgalema Mothlanthe Commission would add impetus to Zimbabwe’s floundering re-engagement agenda.

“Perpetrators of human rights violations and human rights abuses should swiftly be brought to justice and recommendations of the Mothlanthe Commission should be implemented without further delay,” the bloc said in February 2020.

In January last year, Mnangagwa, facing a tide of protests after government increased the price of fuel also resorted to unleashing state security agents who, according to human rights organisations, killed more than a dozen unarmed citizens as well as beating thousands of others. Mnangagwa was once again, roundly condemned.

In his first term in office which ends in 2023, Mnangagwa’s administration has also been castigated for its heavy-handed approach towards dealing with dissent, particularly the abductions of his opponents.

Amnesty International said: “The continued arbitrary detention of Joana Mamombe, Cecilia Chimbiri and Netsai Marova amounts to persecution and is designed to send a chilling message to anyone daring to challenge the Zimbabwean authorities.

South Africa-based political analyst Mike Mavura described Mnangagwa’s tenure as a nightmare, underscoring that the septuagenarian leader had squandered the goodwill which accompanied his ascendancy.

“Mnangagwa’s so-called Second Republic has been a nightmare. Journalists like Hopewell Chin’ono are in detention, the economy is in free-fall, and worse in the middle of a health global pandemic,” Mavura said.

“How is Zimbabwe Open for Business when you close the stock market? The gap between policy and practise in this government is so vast that it has dawned on Zimbabweans that this country is running on auto pilot.”

Mnangagwa has also scoffed at growing calls to engage in a broad based national dialogue with the Nelson Chamisa led MDC Alliance, insisting on caucusing with fringe opposition leaders who lost the 2018 election under the banner of the discredited Political Actors Dialogue( Polad).

On the economic front, with inflation hovering above 700%, widespread company closures, dwindling exports, a gargantuan external debt stock of US$8 billion, and a worthless currency, Mnangagwa’s policy missteps have done little to extricate Zimbabwe from its intractable economic crisis.

His critics contend that his administration has merely tinkered on addressing symptoms of the malady, rather than deploying a range of holistic economic reforms seen as key towards setting Zimbabwe’s fragile economy on a sound recovery and growth trajectory.

More recently, government suspended trading on the Zimbabwe Stock Exchange (ZSE) among a raft of measures it deployed to curb the rapid depreciation of the local currency against the United States dollar and the illicit trade of foreign currency. The local bourse, which resumed trading this week, lost an estimated ZW$240 million during its hiatus.

Coupled with this, government also suspended trade of three counters namely Old Mutual, Seed Co and PPC, rendering the fungibility of their stocks void.
The government has also missed targets of implementing the International Monetary Fund (IMF) Staff-Monitored Programme (SMP) which had clear sign posts indicating how Zimbabwe could stabilise its volatile economy.

At the centre of the SMP, Zimbabwe had clear bench marks on how to contain runaway inflation, stabilise the exchange rate and rein in galloping public expenditure.

However, through a series of blunders, Mnangagwa’s administration finds itself stuck with the economic crisis that characterised Mugabe’s near four decade rule.

Political analyst Maxwell Saungweme contends that Mnangagwa’s rule has been a disaster.

“His tenure is a total disaster marked by pretence, mediocrity, rights abuses, poor economic governance and corruption,” he said.
“There is nothing positive to take home from his tenure. His tenure is the symbolism and definition of failure.”