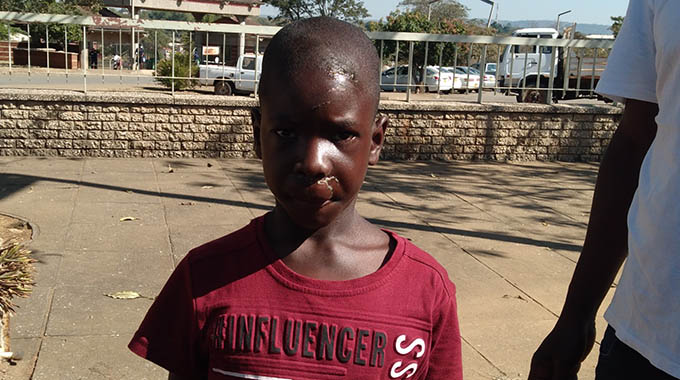 Samuel Phineas at Chinhoyi Privincial Hospital where he sought treatment

A Chinhoyi man has been fined $20 000 for letting his boss’ vicious two pit-bull dogs on a seven-year-old boy, resulting in the boy’s face and legs being seriously damaged by the dogs.

He will do 30 days in jail if he fails to pay the fine.

Prosecuting, Mr Tinoziva Chipupuri told the court that on June 17 at around 11am, the minor, Samuel Phineas, ran towards the main gate at a house where Mwale works after a misunderstanding with his uncle Richard Zulu for allegedly stealing some biscuits at a nearby market.

Mwale heard Samuel crying and opened the gate trying to establish what was happening.

This was when the pit-bulls ran towards Samuel before biting him on the forehead, upper lip and both legs.

Mwale tried to refrain the dogs from further attacking Samuel, but was overpowered until he was helped by his workmate Mr Ackim Moenda.

Samuel’s parents filed a report with the police against the owner of the dogs, Mr Samuel Mugari, leading to Mwale’s arrest.