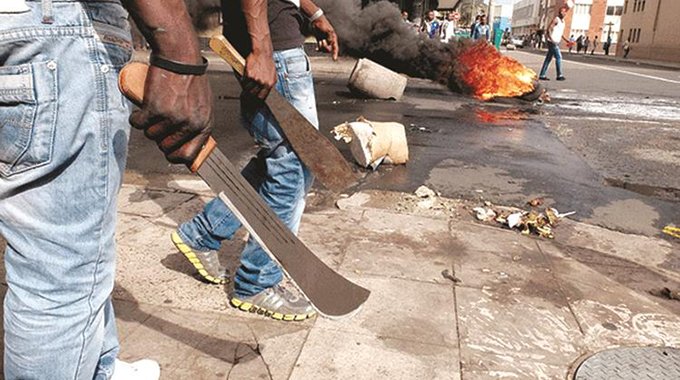 POLICE in Umguza, Matebelaland North province have launched a manhunt for a six-member machete gang that attacked and killed a security guard at Arda Balu Estate before they went off with his .303 service rifle

The incident, according to an internal police memo, occurred on Wednesday.

The police document identified the deceased as Ernest Dube (53) of Plot 7 Helensvale, Umguza.

The report of the murder case was made by Joseph Chimucheka (55) of Arda Balu Estate compound.

“On August 20, the now-deceased was deployed at the Arda Balu Estate main gate in the company of Ashley Manyemba (29), who is also a security guard. The duo commenced night shift duty at 6pm and was armed with a .303 service rifle loaded with 10 rounds of ammunition,” the memo read.

“At about 7:45pm, the now-deceased and Manyemba were seated in the guardroom when they were attacked by about six unknown persons who were armed with machetes and axes. The accused persons first attacked the now-deceased who was carrying the service rifle on his back. They disarmed him and went on to assault him on his hands and head.”

The police document also states that during the attack, Manyemba managed to escape, leaving Dube at the mercy of the gang.

“They assaulted him with an axe on the head and he collapsed. The accused then searched him and stole a Samsung cellphone with NetOne line before escaping,” the memo added.

“After the accused persons had gone, Manyemba managed to walk to Chimucheka’s place where he informed him of what had happened. Chimucheka went to the main gate to investigate and he found Dube lying lifeless in the guardroom. He then went to report at Arda Balu Police Base where an ambulance was summoned and Manyemba was taken to Mpilo Central Hospital for medical attention.”

The police document states that Dube’s body was taken to the United Bulawayo Hospitals mortuary for post-mortem. Manyemba suffered a deep cut on the back of his head and was admitted to Mpilo Hospital where his condition was said to be stable.

“We do not have such a matter here yet,” she said.

Police details indicated that investigations were ongoing and a manhunt has been launched for the suspects who are still at large.