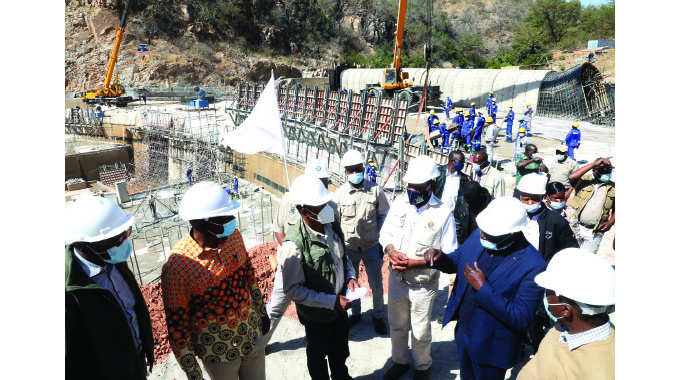 Mashudu Netsianda, Senior Reporter
GOVERNMENT is working on an integrated master plan for the renamed Lake Gwayi-Shangani in Hwange District, Matabeleland North as Treasury is set to release $2,2 billion next month to speed up the completion of the massive project.

The construction of Lake Gwayi-Shangani is expected to be completed in December this year with the 245km pipeline that connects the water body to Bulawayo set to be completed in 2022. Government has since allocated $535 million towards the commencement of the pipeline.

The construction works at Gwayi-Shangani Dam resumed in March after Chinese engineers contracted to the project returned to the country, a year after being held in the Asian nation due to Covid-19 travel restrictions.

Lake Gwayi-Shangani construction is part of the National Matabeleland Zambezi Water Project (NMZWP) which upon completion is expected to provide a permanent water solution for Bulawayo and Matabeleland region.

In an interview during the tour of the project yesterday, the Minister of Lands, Agriculture, Fisheries, Water and Rural Resettlement Minister Dr Anxious Masuka said the visit marks the beginning of a process to set in motion a formal process of developing an integrated master plan for Lake Gwayi-Shangani.

The envisaged integrated master plan will focus on other economic activities such as tourism, agriculture, value chain, infrastructure development, health and well-being, food and security including some of the projects that are going to come out of the dam and pipeline.

“Today marks a historic day because it marks the beginning of a national process that is going to be life changing for Matabeleland North and Zimbabwe. Lake Gwayi-Shangani is the third biggest dam in the country outside Masvingo,” he said.

“This is transformational and for far too long we have acted in disjointed and prefatory approaches as Government and thanks to the new dispensation, which is led by His Excellency President Mnangagwa for the new approach.”

Dr Masuka said unlike in the past during which a dam would be commissioned upon its completion before people turn their backs, Government has introduced a new approach of accelerating all the various component facets of the project in line with Vision 2030.

“The dam is an enabler and we now have this integrated approach in which the President has tasked us to track that progress. The Gwayi-Shangani is no longer a dam, but a lake and this is the third biggest in the country after Lake Mutirikwi and Tokwe Mukorsi and this is something that is exciting,” he said.

“We are also varying the nature of how we do dams because the dam is not the project, but a means to an end, it is an enabler and this enables Bulawayo to have water, which is why we are now tendering for the Gwayi-Shangani -Bulawayo pipeline. We also have a 10-megawatt power plant and already we are beginning to look at all these things, which are now moving concurrently unlike in the past when we did a dam then we commission it, celebrate its completion and turn our back.”

Dr Masuka said drawing lessons from Tokwe Mukorsi whose water has not be utilised for the past four years, Government is now accelerating all the various components of Lake Gwayi-Shangani project.

He said as part of the integrated master plan for Lake Gwayi-Shangani, the engineers will be able to look at the other ancillary activities that are associated with the water body that need to be undertaken.

“This will also allow Treasury to have this more holistic approach to the project so that in their financing they will also be able to take into account this integrated way of looking at things. This province will never be the same again come 2022 and beyond,” said Dr Masuka.
He said since at least 40 families will be displaced due to the construction of the pipeline, it is critical to avail resources.

The Deputy Minister of Finance and Economic Development Clemence Chiduwa who was also part of the ministerial delegation said next week Treasury will release more than US$90 000 for the evaluation process in light of households that are going to be affected by the construction of the pipeline.

“With regard to Lake Gwayi-Shangani, we are targeting to complete the construction of the dam by December 2022 and we want to ensure that the funds are available. In the next three weeks up to September we are going to release $2,2 billion and already we have released $500 million towards the completion of the project,” he said.

“In addition to that we are also looking at the evaluation that is going to be done to find out if there are any households that are going to be affected especially with the construction of the pipeline from the dam up to Bulawayo. Next week we are going to provide US$90 470 just for the evaluation to be done. The construction of the dam should be a means to an end and what we want to see is economic activities in the ground.”

Deputy Minister Chiduwa said Lake Gwayi-Shangani is going to contribute towards the realisation of the country’s development agenda.

“In terms of devolution, the locals are going to develop and grow a local economy through making use of the pipeline and the dam and these are some of the priority areas in the NDSI which again is also adding to our Vision 2030,” he said.