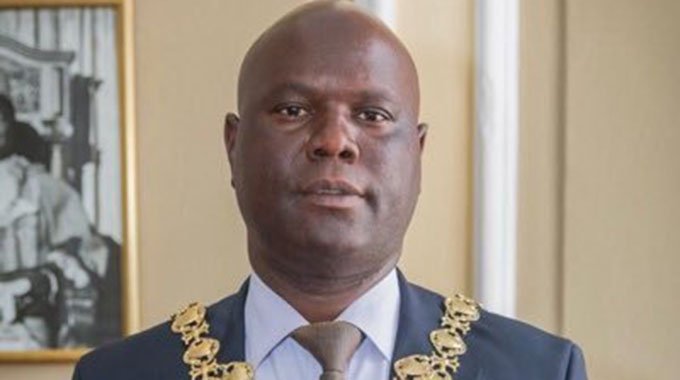 Suspended Harare town clerk Hosiah Chisango and ex-Mayor Hebert Gomba are embroiled in a fight over control of Town House, with the latter being accused of running the city’s affairs from home through proxies.

Chisango, through his lawyers Mthombeni, Mkwesha and Muzawazi Legal Practitioners, has written to the Minister of Local Government and Public Works, accusing the incumbent mayor Councillor Jacob Mafume of doing Gomba’s bidding amid fears the ex-mayor could interfere with investigations into suspected corruption.

Chisango claims there is serious infighting in council which has affected service delivery.

Gomba and Chisango were arrested separately this year on corruption allegations and are out on bail. Gomba was the first to be arrested on July 22 on allegations of corruptly allocating land to undeserving beneficiaries while Chisango was later picked up on September 10 on allegations of illegally creating 14 residential stands in Kuwadzana without following due process.

Gomba was then recalled from council in August while Chisango was suspended after his arrest.

On November 2, Chisango’s lawyers wrote to Local Government Minister July Moyo, seeking their client’s reinstatement on the basis that council had not charged him. The lawyers argued that council should have appointed a special committee in terms of Section 100 of Urban Councils Act, to investigate their client if they had any case against him.

“The audit would outline any breach of processes and any prejudice to council. These processes were not done, but council want to rely on a report from municipal police.

“The current dynamics are that Gomba is still controlling the same council activities through Negion Moyo (head of public safety) and Dr Collen Tongoona (chief security officer). Gomba and some of the councillors who were arrested still regard our client as a threat to their interest and are therefore keen to keep him out through their people, Moyo and Tongoona,” said the lawyers.

Chisango also took a swipe at Cllr Mafume saying: “The current mayor, through his actions and inactions, also seems trapped in this web, as he seems hesitant to decide on our client’s issue to law.

“He is a lawyer himself and these decisions should not be difficult. He has a report that got to his desk unprocedurally, but fails to take a decision. This just raises questions.”

In response, Gomba yesterday said Moyo and Tongoona were employees who reported to the chamber secretary and he had no control over them.

“I do not control council. Its illusionary to say I control council simply because a person is being investigated by the Harare Municipal Police whose mandate is to do that work,” he said.

“That is why Chisango doesn’t want Moyo because he asked for authority to investigate him. He must not involve me in his dealings.”

Gomba further defended Moyo and Tongoona whom he said were being attacked for merely doing their work.

Clr Mafume said he had nothing to do with Chisango’s suspension, adding that it was triggered by police investigations.

He said council was waiting for police investigations and an internal probe to be concluded before Chisango’s fate could be decided.

A fortnight ago, Minister Moyo warned council against reinstating the arrested and suspended employees, saying there was no guarantee they would not interfere with evidence or with witnesses who were among their subordinates.

Nullification of parliamentary recalls a blow to Zanu-PF: Analysts